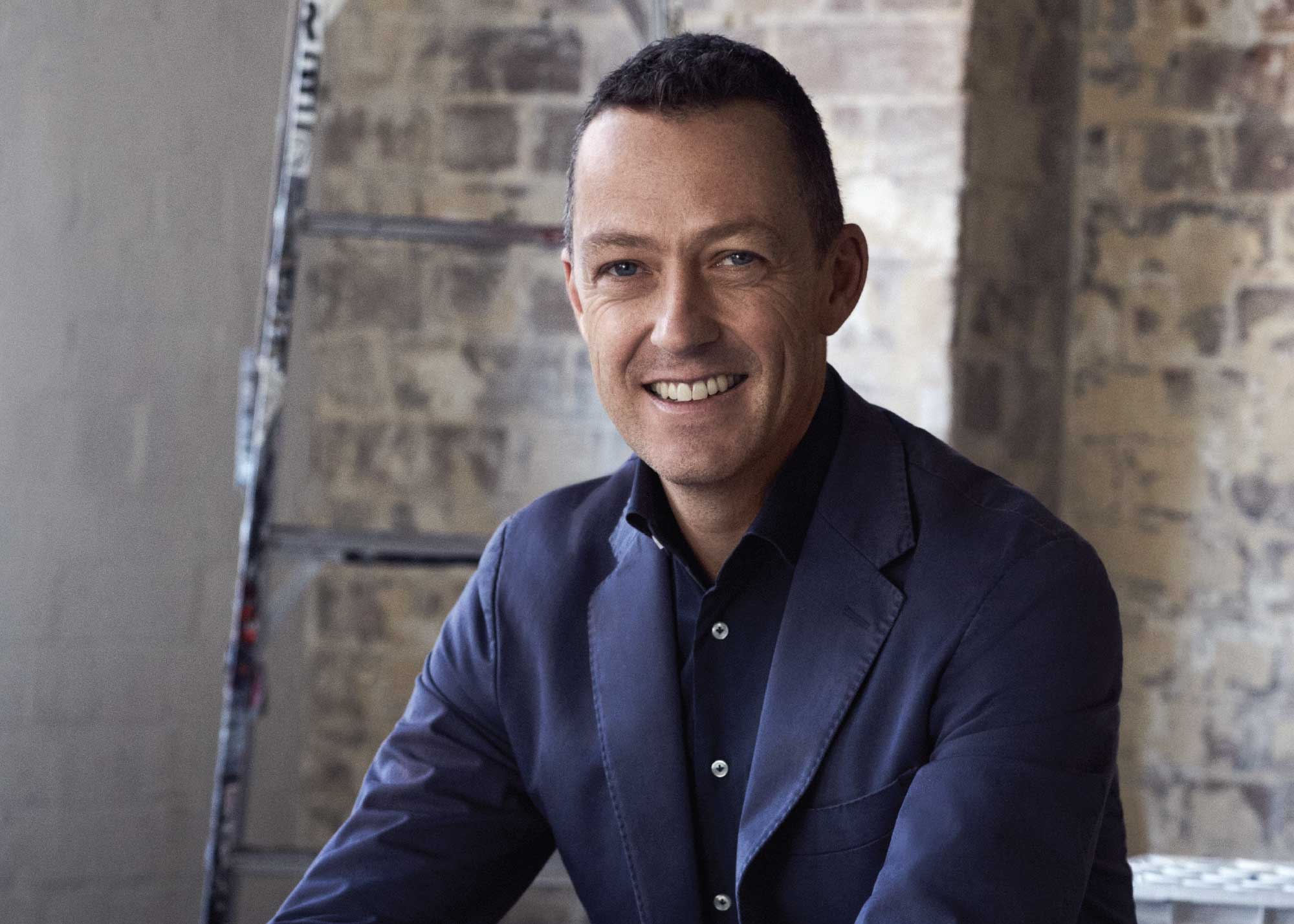 You can’t talk to a Sydney developer about architects without the same three letters popping up time and again.

Such is the impact of celebrated architecture firm SJB on the cities and towns of modern day Australia. The spectrum of SJB’s work is vast and many coloured; from coastal and CBD residential towers to public malls, luxury hotels in Europe and super yacht marinas. Scrolling through the endless projects on the company’s website is an eye-popping recipe for repetitive strain injury, as an endless stream of evocative images cascades down the page.

At the helm of SJB’s formidable Sydney office is the gifted and gracious Adam Haddow, who has played a pivotal role in the growth of the office, from just three team members in 2000 to approximately 100 today.

I’ve only ever heard him referenced in the most endearing terms by some of Sydney’s most notable developers, and upon meeting him at the bright and buzzing offices of SJB in trendy Surry Hills, I can see why.

There is a refreshing authenticity to work environments that are graced with the presence of man’s best friend. And, although I can’t recall the name and exact model of the four-legged friend who joined us in our meeting room, it seemed to suggest to me that this was an environment free of airs and graces, which in itself, seems entirely congruent with Adam’s country Victoria upbringing.

As the son of a plumber, he grew up on building sites, and it is possible, he quips, that his own home is still under construction today.

From an architect of Adam’s pedigree, one might expect the epic story of a genius taken by unexpected inspiration and drawn to illustrious international firms, before returning to his roots and finding a home at SJB. But the truth is far more astonishing: Having grown up on building sites, he always wanted to be an architect. He graduated, began work at SJB in Melbourne and the rest is history.

In 2000, Adam moved to Sydney for three weeks to work on the redevelopment of St Margaret Hospital on Bourke Street, at which point, bewitched by the Sydney’s weather, he promptly relocated and the Sydney office immediately grew by 30%, to a staggering staff count of three. Over the coming years, the impact of this team on its clients and staff would see the firm swell to a staff count approaching one hundred today.

Since his arrival in Sydney, Adam’s influence has extended across a range of landmark projects, such as the old wool store on Harris Street Pyrmont with Darren Williamson, which won the State and National AIA Heritage Awards, and the reinvigorating of Waterloo through the exotic Casba development, with Michael Grant of Cornerstone Property Group.

81 Foveaux Street introduced another chic, urban aesthetic into Sydney’s creative inner city, providing affordable and connected apartment living in one of the world’s most expensive cities. Its angular concrete facade acknowledges the raw functionality of old Surry Hills, while at street level a continuous awning provides pedestrian protection and space for outdoor dining. To the underside, an illuminated art piece, by friend Mika Utzon Popov, brings the street to life at night and invites the suggestion of an upmarket hotel lobby.

Environmental context is everything

When asked about the question of inspiration, it is clear that Adam is firmly motivated by context: “We don’t set out to create icons. We’re inspired by history, context, precedent, people and nature, of course.

Nature is the most aggressive communicator. It informs colour, form, materiality and texture.”

This pre-occupation with nature is abundantly evident in the design of his own apartment, which is itself a wonder of inner city landscaping sitting atop the heritage Cleveland & Co. development.

The somewhat surreal concept of an urban meadow created in collaboration with landscape architect, Will Dangar, makes the city beyond seem almost implausible at first glance and has resonated around the world, winning the category for Residential projects at the INSIDE World Festival of Interiors in Berlin.

Cleveland & Co. itself is another wonderful example of SJB’s flair for adaptive reuse projects.

Adam is not alone in his fundamental belief that an interweaving of cities with the natural environment should be the objective for planners, developers and architects as we make our way into a future of increasing high-density living.

He has been quoted as saying “landscape first, buildings second” when speaking of design. It is his opinion that we should be working on adjusting our built spaces to the environment rather than constantly trying to fashion our environment to satisfy an endless state of need. Breezes should be captured, shadows should be extended in summer and retreat in winter.

“I’m most interested in mixed-use projects.” Says Adam. “The more complicated the better. I enjoy the challenge of managing conflicting interests and density seems to bring this to the fore.”

As a continent we’ve never really done density, so we don’t know what it means to us as a nation. We don’t yet have a unique civic understanding of what density is in the Australian context. In developing our own cities, we’ve simply borrowed from the US, Asia and Europe – and we’re only beginning to develop a consciousness around our own uniqueness now.”

“In fact, Sydney is one of the lowest density cities in the world. The colonies were built on the quarter acre block and one’s land was one’s security. In truth, everyone will complain about developers but still want to develop their own properties regardless of neighbours and restrictions and history when it suits them. So, for a long time, we’ve held onto sentimental, underwhelming suburbs that are begging to be redeveloped for modern urban living.

Now as population numbers grow and land becomes scarce, there is this YIMBY movement saying “Yes In My Back Yard”. Locals, who have lived in or around the expanding suburbs of Sydney are now buying up apartments in order to stay in their areas – and this is why designing for quality, high density living is of paramount importance for Australia’s architecture fraternity.”

The opportunities for the future of Sydney architecture

“I’m a big believer in ‘the project at the end of the street’. The home game keeps you honest, self-critical and future-focused. At home, you have to make sure you’re going to be proud walking past a building for the rest of your life.

We have an amazing collection of architects in this city and we should be embracing and celebrating this resource. There are still the remnants of tall poppy syndrome floating around but in general we are a more collegiate bunch than generations of architects before us.

We are living through an unprecedented period of growth at the moment. Investment in infrastructure and future cities has never been more robust, with new metro lines, light rails, airports and a three city strategy that’s setting the stage for an exciting and pivotal era in Sydney architecture. The responsibility for us as an industry has never been greater.”

Projects that have stood out

Adam talks about his career being something of a continuum of projects,

all of which have been of value and that beyond the built environments themselves, it has been the many wonderful experiences and working relationships rather than the built elements that are the basis of his most memorable projects.

He goes on to mention a few names, citing the various inner city projects with Cornerstone Property Group and the old wool store with Darren Williamson amongst others, where a meeting of minds has supported excited collaboration and long-term relationships.

“The master architect is a fallacy.” He goes on to say. “The success of every project rests on a huge team of stakeholders. Everyone is invested and you’re only successful as a result of the team of people around you.”

Share Tweet Pin It +1
Previous PostThe Journey Is The Destination
Next PostAustralia’s Construction Industry Has Hit A Wall That Only Innovation Will Bring Down - Jamie Shelton, CEO, Northrop Consulting Engineers