Beyond The Comfort Zone With Koichi Takada 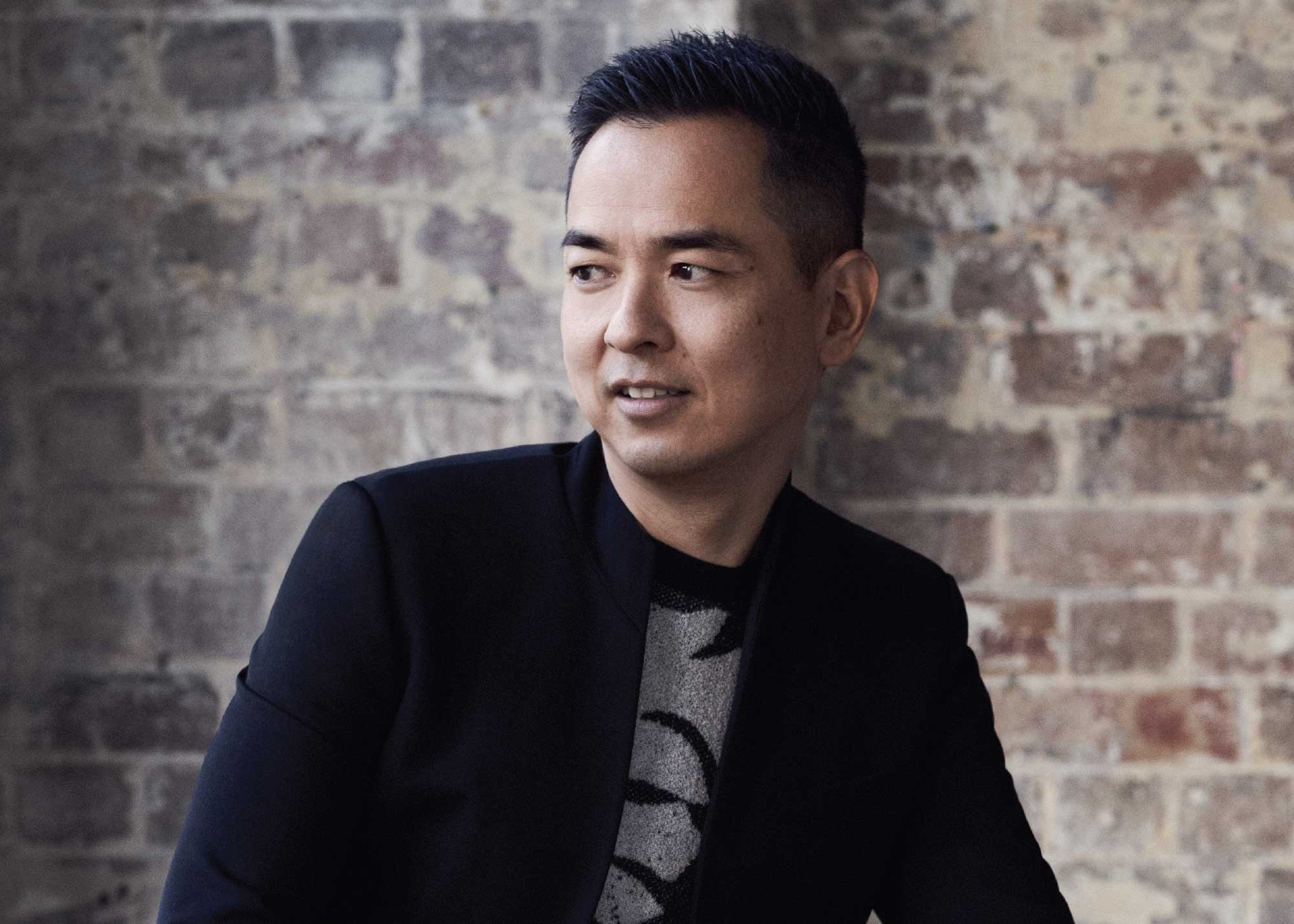 When it comes to the design of Australia’s, and indeed the world’s, future cities, Tokyo born Koichi Takada has a strong opinion on what is worth fighting for.

There is a powerful duality in his approach. Whilst his motivation is fundamentally holistic in its intent, a penchant for pushing boundaries has seen him described as the “bad boy” of architecture.

He is a strong proponent for the democratisation of common space through development, yet at the same time acutely commercial, designing developments such as Green Square’s titanic Infinity project that saw 4000 buyers register for 326 apartments and sell out almost immediately.

His creative conviction is inspiring major projects in Sydney, Tokyo, Los Angeles, Mexico City, Doha and beyond – collaborating with an enviable list of clients to realise a vision for cities within cities: one which enhances lives and cements legacies.

With eight significant projects due for completion by 2019 in major cities at home and around the world, the design ethos of Koichi Takada is set to reshape the precincts and lifestyles of high-density environments as we know them.

For Takada, “Architecture has always represented something of a vehicle rather than a destination. It has been the means by which I discover the world, its many cultures and amazing people. It is a journey that continues to surprise and delight me with every new project that we undertake.”

As a youngster in Tokyo, Takada was drawn to Manhattan’s towering metropolis, and at just 18 years of age, said goodbye to his family to undertake his tertiary education beneath the concrete canopy
of what many would argue is the world’s most exciting city.

A marriage of the natural and built environments.

Whilst inspired in the early days of his New York chapter, it came as some surprise that the degree of density and unyielding stimulus of New York city triggered an overwhelming sense of claustrophobia in the young architecture student, forcing him to retreat at every opportunity to the respite of Central Park’s 350 hectare sanctuary.

It was at this very early stage of his career that he realised the essential role that nature plays in promoting wellbeing and balance in the context of high-density environments. “I realised there, that the human spirit is nourished by nature. The luxuries and mod cons of the built environment are a wonderful result of contemporary society and technologies – but as human beings, we must have a connection to the natural world in order to thrive.”

This fascination with the marriage of the natural and built environments is apparent in the organic curves and green public spaces that form the centrepieces around which his formidable designs come to life.  The soaring arches of Crown Group’s Arc on Clarence Street in Sydney CBD break the angular skyline with a gentle and organic form, inspired by curves found within the natural world, such as the section of a tree trunk and the formidable arched dome of Uluru. 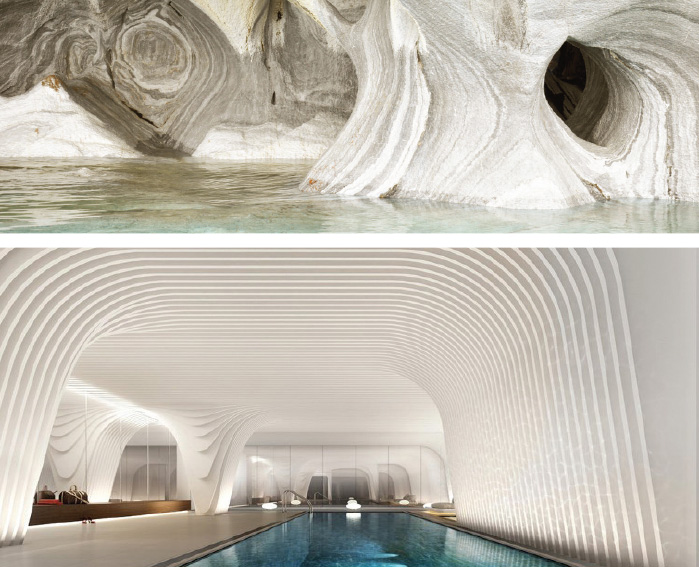 The ribbed arches of Arc’s Ice Cave (below) and the undulating rock formation that inspired it (above).

His design for a 216-unit development in Brisbane features an audacious 120m waterfall cascading down the building’s façade, along with endless hanging gardens and overflowing planters that creep up the sides of the building. Public spaces include community garden, children’s play spaces, cinema and amphitheatre.

The spirit of this work is close to his roots in Japan, where the concept of “iyashi”, meaning relief or retreat, is a cornerstone of healthy living.

In a futuristic metropolis such as Tokyo, where high speed trains and crushing pedestrian activity prevail, “iyashi” refers to healing the connection between mind, body and spirit, while being in an environment of soothing comfort.

As cities like Sydney move towards increased densification, this idea of escape and relief in a soothing environment is important at the most fundamental level.

Our ability as a city to satisfy this basic human need goes to the very core of liveability and wellbeing, which very well explains the firm’s preoccupation with this principle at every level.

He puts forward the idea of bringing the elements of the countryside into the city in a vertical or stacked format. “Globally, cities should be looking towards old fashioned values of connection to the natural world – and Sydney is the perfect place to address this and export innovation to the world.”

“Buildings themselves should contribute to the betterment of the environment. We are at the point now at which technologies exist to promote clean air, noise cancellation and integrated solar energy solutions.”

He cites the smart design of his Mexico City project wherein integrated reflective panelling filters light from upper levels down into the retail centre below.

So sincere is the concern with health and wellbeing that even within the firm itself the practice of exercise and healthy living is encouraged amongst the team, with Takada, an avid cyclist, covering over 200kms per week. He draws a parallel with physical fitness, proposing that “buildings themselves should be designed to be fit and efficient – and as a community, we should be moving towards tall, slim towers with smaller footprints.”

One of Takada’s latest projects is a 388-unit development in Waterloo, which forms part of a larger five-building plan, one of which sees the firm partner with world-renowned Kengo Kuma who recently designed the 2020 Olympic stadium in Tokyo.

44-48 O’Dea Avenue is a quintessentially Takada design, drawing its organic curves from the undulating walls of sandstone caves and an organic timber materiality from the curved muscular roots, or the long spread of canopy, of the native fig tree.

The building is yet another example of Takada’s extraordinary ability to invite nature into our urban sprawl, softening streetscapes and fashioning a more soothing environment.

Public access to outstanding amenity is a key theme for Takada, who believes that the privilege of developing large-scale projects comes with a degree of civil responsibility.

He is a champion of this cause, actively engaging his clients in the process of place making. The results are apparent in the dramatic public rooftop gardens sculpted below the curved ribcage of his Arc project.

“The space was initially set aside for three large penthouses and it took some discussion with our client to arrive at this decision which facilitates an amazing amenity for the public and creates a strong sense of place for the project.”

The Herculean Infinity by Crown Group at Sydney’s Green Square is a remarkable study in activated public space and solar amenity, featuring a vibrant central plaza comprising F&B and retail offering, as well as public parks and gardens atop the building’s “rollercoaster- like” curves.

When asked for his view on the qualities that make great architecture, a striking duality is once again apparent in his reference to both shock value and invisible design.

He cites the work of greats such as Rem Koolhaas, who are able to elicit powerful emotional responses to their architecture whilst acknowledging and enhancing the qualities of the given surrounds.

For Takada, the future is an opportunity to harness the power of new building technologies, towards inspired environments that invite nature into our lives and support the wellbeing of future generations, for whom high-density living is the inevitable new norm.

Share Tweet Pin It +1
Previous PostThe Flight to Quality is a Long Haul
Next PostTim Phillips of TILT Industrial Designers, On Architectural Solutions To Climate and Energy Constraints